Last week, our entire company — 400 of us now — gathered in Park City, Utah for our annual Grand Meetup. And grand it was.

Park City is stunningly beautiful. The weather was well above normal — in the mid-20s, Celsius. We were treated to bright blue skies almost every day.

I learned so much and had such a wonderfully inspirational time, that I’m still processing the experience. I got the chance to co-work with many of my team members and others within the company during the week. We hatched some great ideas. I enjoyed fantastic conversations with smart people. I met many new friends and reconnected with old ones. (I actually keep a list of people I want to make sure that I connect with during the week. That list gets longer every year!)

One of the beautiful things about Automattic is that there are no invisible social barriers. At a meal table, everyone is welcome. The conversation might start with, “tell me about your role at Automattic,” and then quickly migrates to hobbies, interests, and passions. I learned about nomadic life, took notes on new books I need to read, had a fascinating conversation about social prejudices online, learned others’ Automattic origin stories, discussed books, sat in awe of Automatticians jamming, took an epic bike ride and gutted out some crazy inclines, got some new ink, ran four miles on the mountain, bonded with flash talkers over similar experiences, almost bit through my lip trying not to burst into tears during my own flash talk, witnessed the musical talents of Automatticians on stage, and danced along with the Jane Doze at the 10th Anniversary Party. Note to self: never ever book a 7:30 a.m. return flight again. You miss out with a 4:30 a.m. wake-up call.

Just getting the chance to talk to others, to learn more about them, and their lives outside Automattic expands my heart and mind. This past week reminded me once more, of just how lucky I am.

Oh by the way? We’re hiring.

Only three-and-a-bit miles plodding along through the snow. But I did it. :)

I find music is critical to keeping me motivated, although some song lyrics become especially poignant, given Winnipeg’s weather conditions:

The season rubs me wrong…

I hope wherever you are, is a better place than this…

The second song, Carry Me Along by Express and Company, (on WordPress.com, yeah!) is timed to start just as my walking warm-up ends. It’s a toe tapper and helps get me moving:

Today, with the release of issue 356, I’m retiring as editor in chief of A List Apart. For the last six years, I’ve had the privilege of making a great magazine with an amazing team of co-conspirators.

Thanks and praise
Anyone who publishes anything knows it takes a group of people to do it well. I owe a debt of gratitude to these fine folks:

Thank you, authors
Special thanks to our authors: those brave, incisive folks who are passionate enough about their beliefs in code, design, standards, and content to risk sharing their ideas with the world. We the community, are forever grateful.

Thank you, readers
Above all, thanks to the readers for reading and coming back issue after issue, for your thoughtful comments, for your on-point feedback, and for helping to share our authors’ ideas with your colleagues, your employers, your clients, and friends. For without you, where would we be?

Murphy was a part of our family for 17 years. We brought him home at eight weeks old. He was born on May 24th, 1995, the runt of his litter. I remember the day we went out to a place on Henderson Highway to look at a litter of Bichon puppies. They’d named him Sam at birth, to tell him apart from his brothers and sisters. I remember picking him up and tickling his belly. He was so small his entire body fit in the space between my elbow and wrist. Here’s what he looked like at about 12 weeks:

As a puppy, he loved to play fetch with his ropey, and chew ever so gently on his stuffed bear. He taught us what a FRAP was, running dozens of circles around the coffee table at top puppy speed only to flop on the carpet five minutes later, happy and exhausted. At the time, we had two Siberian Huskies, who lived outside. Mike would walk all three, with the little white dog leading the pack.

Murt would “put me to bed.” After I went to sleep, he’d hop off the bed and run into the living room and start tugging on Mike’s sleeve, wanting to play.

When Murt was a young dog, he loved to stalk squirrels. He’d lie on the deck at the cabin and watch for squirrels and chipmunks that came to eat the seeds that fell out of the bird feeder. Eventually a squirrel would appear, and Murt would ever so slowly attempt to creep down the stairs, and try to sneak up on it. It took every ounce of willpower he had not to charge them, and he quivered the whole time, this white snowball slowly stalking through the green grass. Murt learned that when the rodents fled they always ran to the bushline and he started to flank them. He never did catch one, but he never tired of trying. Here’s Murt waiting for a squirrel to appear:

Murt loved the lake and especially the boat. He was a great swimmer and enjoyed every minute in the water, the tip of his tail sticking out as a rudder.

Here’s Murt on the boat, just waiting to head out for a ride.

With the sun on his face and the wind in his hair, in his favorite spot on the boat.

Over the years, he slowed down a bit, as old dogs do. He needed help with stairs as his vision faded. His hair thinned along with his body. His hearing was all but gone. We’d been softening his food with water and warming it for him for several months to make sure he was eating enough. We made sure he got the cushiest spots to relax in the sun.

He’d been doing well until this past Sunday. He stopped eating and his breathing became rapid and raspy. When he began having trouble standing, his hind legs slipping out from beneath him, we knew it was time to do the right thing and take him to the vet. It’s hard to lose your best friend. 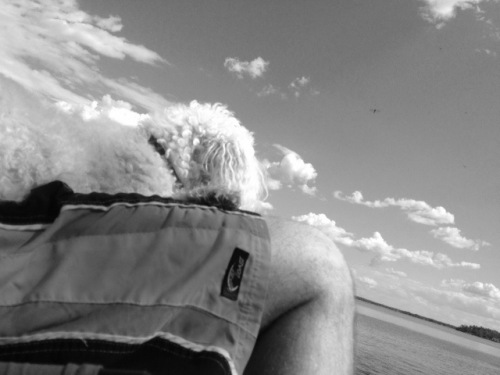 The internet is really a vast sea of information, where each URL, each blog post, each highlight, is a lonely island in the ocean. I’m most interested in how we can improve the way we create and document connections among disparate bits of information, such as news pieces, long-form articles, blog posts, comments, photographs, highlights, and tweets. I’m most interested in how all these things taken together, with annotation, can create new meaning, and start new conversations. No good tools exist for this yet. We have text files, Evernote files, Simplenote files, but those are inaccessible to others, hidden away in the ether an on our hard drives. We can collect these items on blogs, though our current tools make it difficult to annotate in a meaningful, semantic, public way. Comment threading is just a start, but not suited to this larger purpose. I see this as the an important challenge the internet needs to solve.

I’ve been enjoying Readmill for a few months now. I was fortunate to get an invitation to Readmill when it was still in beta. The application is beautiful and has since become my reading application of choice. I’ve shared some feedback with Readmill via Twitter, some love, and some suggestions. They’ve always been prompt, gracious, and above all personal in responding. Today I received an email to thank me for being part of the beta release of the application. The email was lovely. What delighted me, was seeing the reply-to address:

Never in my online life have I seen such a lovely invitation to customers to keep offering feedback. No anonymous “no-reply@” or off-putting “do-not-reply@.” Instead, customers see a welcoming and wonderful opposite. Please reply. Gracious and personal. When I wrote back to express how delighted I was to see it, I received a personal reply from David Kjelkerud who promptly credited Orson Kent for the idea.

Readmill opened to all recently. If you haven’t yet, you must sign up. I hope you love it as much as I do.

If you’re reading something, even a one-sitting short story or article, you’re making a commitment. You’re making a lot more of a commitment because reading is in fact extremely interactive from a neurological point of view. Your brain lights up a lot. Whereas [listening to] music is more like something that happens to you, reading is something you do.

The last 60 or so books I’ve bought, I’ve bought them via Kindle for iPad. Erin recently introduced me to Readmill, which offers a reading app and a way to share highlighted passages online. People can follow one another, see what they’re reading, see which parts of a book someone found most interesting, puzzling, moving, or troubling by their highlights and comments on the text. Readmill posts your highlights and notes to your profile if you choose.

Readmill continues to improve with each iteration. The last update included an in-app dictionary, something that I find indispensable. Readmill doesn’t yet have the ability to re-read a book. You can re-read it, but the book is considered “finished.” I find re-reading far more pleasurable than the first read. On Erin’s recommendation I read The Magicians by Lev Grossman. Fantastic stuff! Read it twice. Am now reading Grossman’s sequel, The Magician King.

Some of my favorite random passages from The Magicians:

Use magic in anger, and you will harm yourself much more quickly than you will harm your adversary. There are certain spells . . . if you lose control of them, they will change you. Consume you. Transform you into something not human, a niffin, a spirit of raw, uncontrolled magical energy.

Alice was still watching him. Behind her the mosaic was a swirl of green tentacles and whitecaps and floating fragments. He slid down the stone bench to her end and kissed her and bit her lower lip until she gasped.

He felt his intoxication already turning into a hangover, that queasy neurological alchemy that usually happens during sleep. His abdomen was overfull, swollen with tainted viscera. People he’d betrayed came wandering out from the place in his mind where they usually stayed.

So instead he kept his little particle of shame and filth inside, where it could fester and turn septic.

Most people are blind to magic. They move through a blank and empty world. They’re bored with their lives, and there’s nothing they can do about it. They’re eaten alive by longing, and they’re dead before they die.

Daniel Tammet‘s TED talk A Different Way of Knowing is a fascinating look at how humans perceive language and meaning.

Perceptions are at the heart of how we acquire knowledge. Esthetic judgements rather than abstract reasoning guide and shape the process by which we all come to know what we know.